To begin, my plan is to tuck at least 100 Normal Classic wins under my belt before heading back into Ranked queues. I realize that may seem like far too few, but I did manage to snag a Silver V ranking before the end of Season 3. That being said, I’ve got to have a helluva lot more Summoner’s Rift experience if I want to consistently play Ranked well.

Despite the Season 4 changes, seems like no one ever calls bot support in Normal Classic. Luckily I love to play support! I am finding that Taric is a solid bot support, assuming a typical bottom lane on the opponent’s side, despite the Season 3 nerfs. His kit scales so nicely off armor, including his passive, and he has a heal and easy point-and-click stun. I’ve posted 3 or 4 wins in a row playing him.

On my to do list, however, is figuring out what I am supposed to do as a support when the team scatters to the jungle to farm in the typical ebb and flow of the game. I don’t find Taric, or really any traditional support, to be that good farming solo. I can ward but I’ve usually placed whatever wards I can by this time. Do I follow a teammate while they farm jungle camps? What is the general rule of thumb as a support during these game moments? Clue me in via comments but in the meantime, I’m going to see what I can find online.

…you can’t stop thinking about Taric’s Armor of the Fifth Age skin while watching the Vancouver Whitecaps goalie play against the Sounders. Great match, Sounders won, and I love the pink, but couldn’t get the image out of my head the whole night! 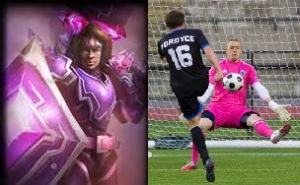 So despite the length of time since my last post, I have been happily playing League in the rare free moments I have these days (starting your own business is time-consuming!). No grand plans to play Ranked or even Normal. Most days I just can’t muster the focused attention it requires.

My fave moments of late have been duking it out in the All Random All Mid (ARAM) map. Now I have definitely had some pretty crappy games, rolling a melee champ or one that I haven’t played in forever. But I did have an amazing match recently on Lux. Granted we had a near ideal team with 4 ranged champs and Darius. We completely rolled over the enemy team with a total of almost 200 team assists. It rocked!

One of the things I love about ARAM is that it forces me to play champs that I may not have played for a long time or to create new strategies with champs that wouldn’t work (as well or at all) in Classic or Dominion. I rolled Xerath for a match and internally went “uggh” but it ended up being a fabulous match for me, using his Locus of Power on W to root him in place and dish out a devastating Arcanopulse. Even better was when his ult was up and I could follow up three times with his Arcane Barrage. Total fun!

Another bonus is that ARAM is extremely fast-paced like Dominion so that it minimizes and often eliminates any sniping. I did play Taric last night and was rightfully bashed by one player who venomously instructed me to never play Ranked. Hell no I wouldn’t play Ranked with Taric! He is still very much a work in progress for me.

And then the third thing that is a blast with ARAM is that support characters can be a real delight to play. No chasing your carry or finding yourself solo in lane….your allies are always close at hand and any support that can heal is a huge boon given that you cannot heal on your platform.

So once the youngest heads off to preschool I think I will sneak in a match or two!

Over the last month or so, I would put the following on my Current Faves list. There are many other champions I love playing, but I just haven’t as much of late.
•Morganna, Cassiopeia and Annie as AP casters
•Riven, Miss Fortune, Irelia, and Shyvana as AD
•Sona (and perhaps Taric) as support

Played a quick Classic bots game to get my first win of the day bonus and went with Taric. This time things went much better. I maxed Q and E for the heal and the damage and began to have a few things just happen right, at times getting into a good rhythm. Will need to figure out how to work W into the mix, but the game went relatively quick…was only level 15 when it ended, typical for most Classic beginner bot matches.

He is growing on me – in a good way. Need to continue to remind myself that E has a bit of range (though does do more damage closer you are). He’s a big dude with heavy armor and a huge sword so visually he screams melee (which he is for the most part). Getting in more play time helps me overcome the visual cues and know without thinking that I can be a bit back of my target if I so choose with that particular attack.

Verdict is still out whether he makes onto my “most played” list.

So you know it’s gonna be a bad match when you die at level 1. It’s been forever since that has happened to me, and in Classic Bots? OMG, shameful. Ended up with 16 assists and spent a lovely long time just wiping out champs on their platform with Thresh and someone else, hovering at low health but totally wiping them out time after time, which was very fun, but I am a long way from mastering him. About what I would expect on first go.

And don’t know if he says anything annoying, I had the volume turned all the way down.

So I luv playing Sona support in Classic and I watched @Dazed_FD play Taric in ranked today. Decided to spend some of my growing stockpile of IP on him. My champion closet is extremely estrogen heavy, by design, so we’ll see how he gels with the gals. And with me.

I also have a fascination with the AotFA skin. Femme Planet of the Apes. Is it also really an old WoW joke? Anyhoo, I’ve spent the last hour browsing Twitter and talking with DH and not playing. I better start before running out late night to grab Starbursts for the preschooler’s homeade Valentines. Which turned out fabulously.

But I digress. Playing Taric. Now. Not gonna horrify my oldest just yet with the pink Taric (though it is so awful it’s awesome). And if Taric says annoying things like Garen he might get sold back to Riot.