Poor Urgot. Truly the ugliest champion in the entire League and according to LOLKing, one of the most unpopular as well. All that being said, he is an awesome champ to roll in ARAM. I have no idea if he would play as well in Classic, something I will have to test out. Why is he such a boss in ARAM?

1 – Very few people know anything about Urgot, so they don’t know his moves or how to counter him. This would be equally true in any game mode.

2 – Because he is so unpopular, Riot has generally left him alone, so no major recent nerfs that I know of.

3 – He is a relatively durable champion despite his Marksman role. His base health is generous, he can pop his shield frequently, and his passive reduces opponent’s AD output.

4 – He is an AD champ, something that is super handy in ARAM to help bring down towers quickly.

5 – His bread-n-butter Acid Hunter has an amazingly short cool down, so with just a little more CDR in items, you can pop that puppy over and over and over. Add to that his passive that will reduce their damage output, the ability to lock on to a target (with increased range) if they’ve been hit by Corrosive Charge or slow them if he has his shield up, it’s just a total blast to poke, poke, poke and kill. Mana can be an issue early in the game with this play style, so I often start with Tear of the Goddess and boots.

6 – I think my favorite though is his ultimate. It suppresses your target for the duration of the channel and Urgot swaps places with them, so it is incredibly disorienting to your unwitting victim. It can place Urgot in a vulnerable position (plus the time to channel) so you need to be careful that you don’t do it in a crowd or under a turret when you are low on health, but it does grant a nice armor and MR buff, slows the target for several seconds after and it is just so much fun! 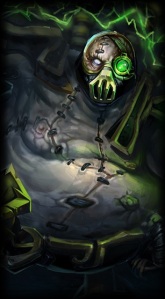